Not a lot of Serious Attempts at any completed images, since weather has been pretty bad and as we get closer to planet season, I’ve just been messing around, basically. I took off an entire week I knew would be a new/no moon and of course it was cloudy every. single. day. You win some, you lose some. Of course it cleared up instantly the day I went back to work. Jupiter was at opposition on 6/10, so I decided to screw around with planetary stuff again. I don’t really have a telescope suited for planets at all – my astro-tech AT72EDII is only f/6 and I’ve never even been able to get a barlow to work with it (can’t pull focus), but even if I did it’d cut the light down to nil. Additionally it’s only 430mm, so not really long enough for planets. But nonetheless I realized I could use my ASI120mc camera (which I got mostly to be a guidecam) directly with the AT72EDII and take a stab at jupiter for fun. I didn’t really get anything worth stacking (had some debayering issues), but I at least managed to watch Europa slowly set behind Jupiter (had to completely blow out the photo to see the moons). It was pretty neat to watch (this is an animated gif, it’s just slow):

I then targetted the moon cus why not – was curious how diff it looked in a much tighter field of view (but on an admittedly much crappier camera). I didn’t bother stacking the results but I did upload a video. I was pretty impressed by how well my mount tracked – no guiding or anything!

Had a subsequent clear (and absolutely GORGEOUS and very unseasonable cool for June) night, so I setup the gear without much of a clear plan: just screwing around, basically. Astrophotography can be a lot of work so sometimes I have to remind myself it’s okay to just setup the gear and slew around without much of a plan. This particular night though I had, basically, endless problems. I was able to platesolve just fine, but NINA absolutely refused to slew the mount to anything I was trying to target. TL;DR I think the problem was that my battery pack wasn’t plugged in and was actually quite low on power, leading to my mount doing some … odd things. I finally got it to work around midnight, which didn’t leave me a lot of time. I took an hour of luminance of M101, which I might do again on other nights and try to get the rest of the channels. Lastly I pointed at the american nebula, since it’s high, bright and always a satisfying Ha target. I did 10 2 minute subs and stacked: 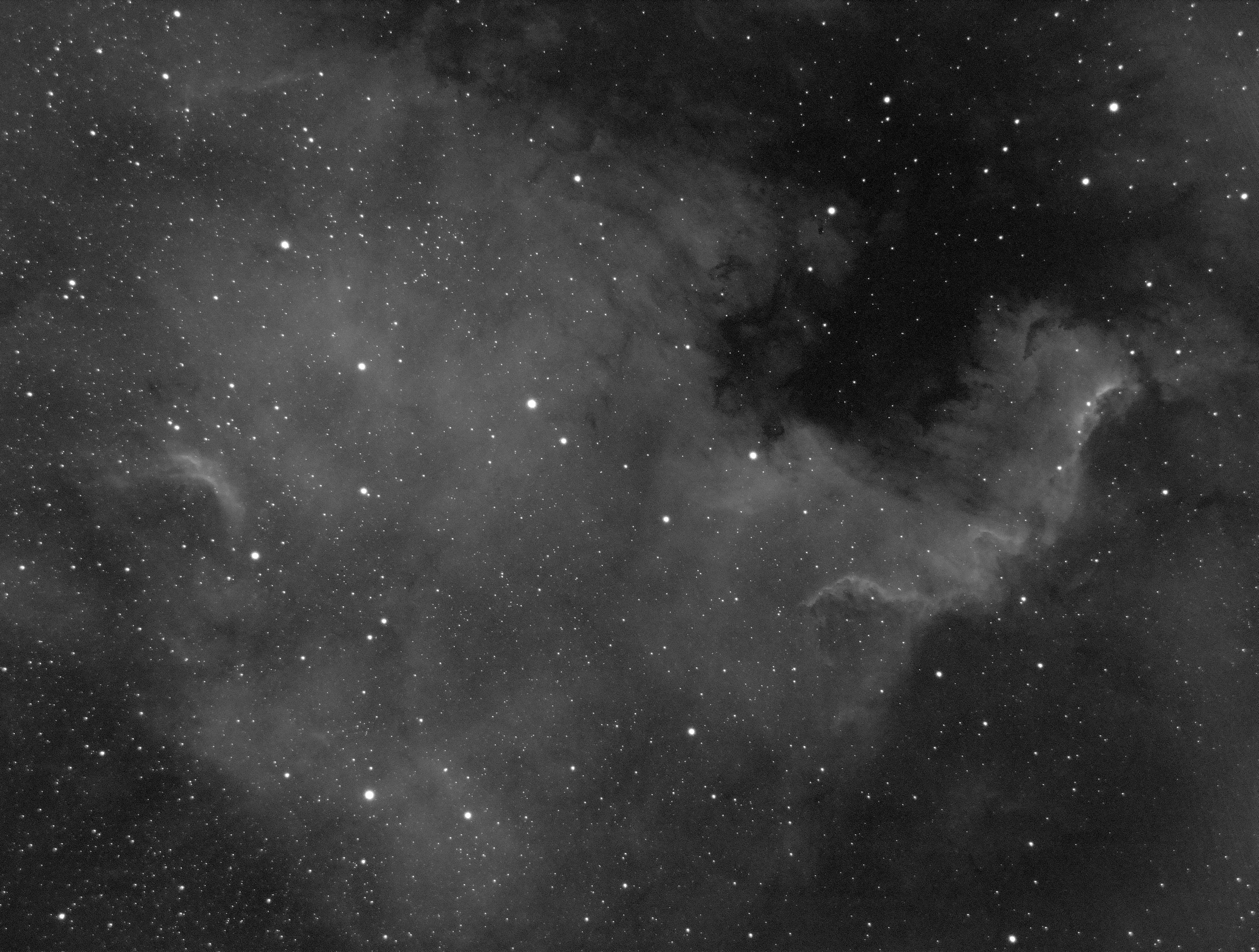 I’ll probably try to get more Ha data and OIII and SII channels as well and see how it looks.

So, not a lot to report, except that I am, yes, dear reader, thinking about buying a new telescope. Planetary season is upon us and I’d really like something capable of doing planets properly and also venturing into some smaller DSO targets. This means, I think, it’s time to venture into newtonian reflector territory. I was pretty well sold on the astro-tech AT8in – an 8” reflector. Alas, this particular telescope and even the 10” at10in are both back-ordered until October! Soooo, if I want to actually do anything this year, I think I’ll wind up getting the Orion 8” version, which is mostly the same OTA/mirror/etc but with different rings/focusers and other things. We’ll see. It’s surprisingly cheap, all things considered. Stay tuned!